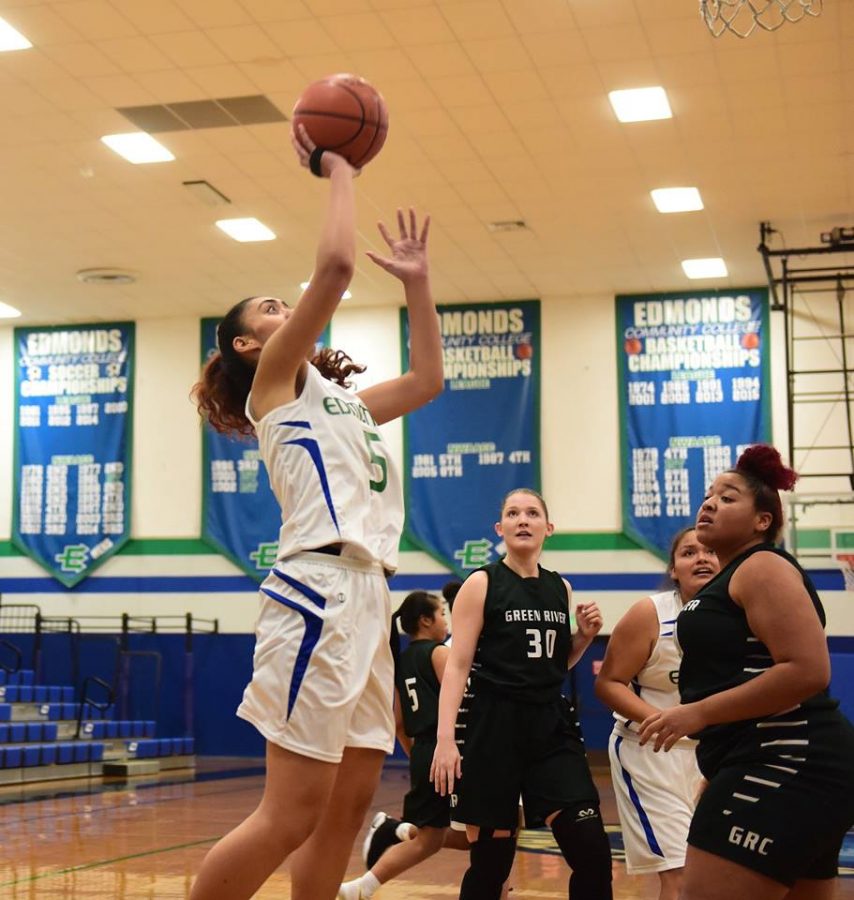 Tiara Tupua shooting for the basket at a game vs Green River.

With four more games to go before the end of the season, the Triton’s women basketball team is still in the hunt for a playoff spot in the North Region NWAC tournament. Utilizing full-court defense to stifle teams, and scoring in the paint, these women battle hard, leaving it all out on the court.

With a new head coach this year, a new offensive system, and an entirely new set of players, the team has had to work through a lot of tough hurdles over the course of the year. But through each practice, and every game played, they’ve showed that they have what it takes to reach their ultimate goal of playoff basketball.

Head Coach Eric Ensign was the team’s former assistant coach over the last couple seasons. He brings 20+ years of basketball coaching experience, and was also an assistant coach of the Tritons men’s basketball team during their NWAC tournament run in 2014.

If anyone can turn a team around, it’s him. Already this season, Coach Ensign has managed to improve their win total from last year. The team has a good chance to make it to the third or fourth seed in the playoff tournament.

Learning a new offense can be challenging for most players, this is especially true when they are also trying to learn about one another, in order to develop chemistry among themselves.

“Our whole team is young together…trying to figure out our skills, and how to use them,” says team center Tiara Tupua. Both her and guard Ryan Terry agree that the best part about playing on this team is getting to compete on a higher level, and in the process, build close friendships.

She and the rest of the team go to work on their game as early as six in the morning each week, or as late as 9 p.m. after a long school day. It takes patience and dedication, and this team is embracing the grind.

“…this is a Gladiator league,” adds Tupua, “everyone’s just trying to fight their way to the top.”

In their victory against Peninsula College on Jan. 27, the team performed an amazing display of winning basketball. Down by as much as 15 points in the third quarter, guard Zaria Smith pulled off an astounding five steals; scoring eight points, and cutting their deficit to six by the fourth quarter. The Pirates managed to keep their lead throughout the game, but after a few stops on the defensive end, and a late game three-pointer from Rocky Leenstra, the Tritons cut it to two.

Finally, the Tritons got the lead with just 1:15 left in the game, and with a couple of well executed in-bound plays to come out ahead, they secured the win.

Center Hailey Carlson earned Triton of the Week honors for her performance at that game. She was one rebound shy of a double-double, scoring 12 points and grabbing 9 rebounds versus Peninsula College. Coach Ensign considers her as one of his most improved players this year.

The Tritons have seven games left in the season. They’ll need to pull out all the stops to make it to the playoff tournament. “We’re still right in the thick of things,” says Assistant Coach Eddie McFerrin. With a win against Olympic College Saturday, February 10, they’ll have a good chance to stay in the race for seeding.

The team has had to make a lot of adjustments over the course of the season. They lost two point guards early in the year due to injury. Because of that, other players have had to take on additional roles. Ryan Terrie considers herself more of a post-player, but now she’s mostly playing the point, and two guard spot. But she too has been sidelined by injury the last few games.

Caitlin Rojas has really stepped it up to take on the role of point guard. In the North division, she’s averaging 5.8 points, 4.5 assists, and 4.3 rebounds per game. Rojas garnered Triton of the Week honors in January 22 for her stellar performance against Northwest Indian College.

Another TW honors recipient is Zaria Smith. She’s been the team’s reliable scorer, averaging 16.8 points per game. Smith’s season-high this year is 34 points against Pierce College. She’s also second place in steals for the North division.

This year’s Tritons women’s basketball team has many talented players. Some have even expressed interest in returning for their sophomore year. If that’s so, it could be a great way to carry the momentum made from this season.

For now though, the team’s focus will be on these last seven games.