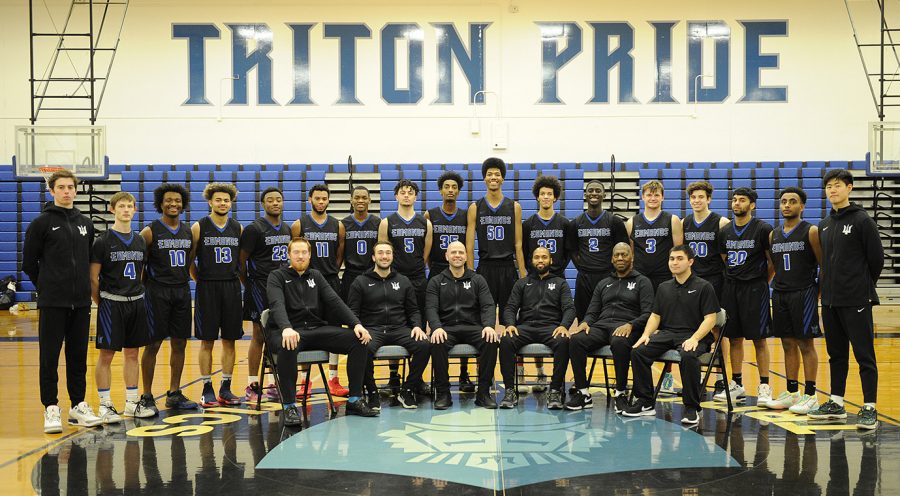 The Triton men’s basketball team pose for a team photo.

With an 111-98 road game loss to Peninsula College last month, the Edmonds Community College men’s basketball team has fallen short of securing a spot in the Northwest Athletic Conference championship.

The most dominant technique used by the Tritons is an up-and-down full court press, which did not prove to be particularly successful in their game against the Pirates who managed to make 37 out of 66 of the shots that they took, as opposed to our Tritons, who only made 30 out of the 67 shots that were taken.

Being crossed out from the NWAC is not stopping the Tritons, however.

“We definitely need to get better at rebounding,” says Kyle Gray, Head Coach. “We’re not perfect and there are still lots of things that could be better in terms of our play style.”

Since the Tritons have also been faced with lots of tight games, Gray adds that the team still needs to improve their “late game execution” in both offensive and defensive strategies.

“He’s out there and he’s going to produce every night […] we can always count on him. Especially when I mentioned that we have been struggling with rebounding, he is definitely a beast on the defensive end which is good to see,” Gray stated. Walker is a very valuable player to the team and Gray isn’t taking him for granted.

“We are making sure that the guys are working hard and practice, because they are a valuable asset to the team and we don’t want that to go to waste,” said Gray. “That means, if you’re not getting better and you’re not practicing the right way, your minutes are going to suffer. We want someone that wants to compete and make sure that they want to get better,.”

Gray brings in a mental training program to the team. One of them includes spending 5-10 minutes before practice where the lights are out and the players are required to focus on the next task, which is a practice or a game, where they will see themselves achieve greatness.

“This helps a lot, especially when it gets to adverse situations where the team is losing,” Gray said, adding that they do “reset walks” where the team will take a walk around the golf course after practice at night. It will be a complete silence for half the walk where they can focus on their own thoughts and determine the most efficient way to complete the next task.

The other half will be dedicated to chat with teammates in relation to the training, which includes talking about the thoughts that they had and asking for advice from each other. “Even if things are going good, you still need to move on and make sure that you are focused on what to do next,” Gray stated.

Still, basketball players are not immune to mistakes.

“If my players make a mistake, we’ll find the issue together and correct it. We’ll watch the film and break it down on the things that can be improved,” said Gray. He doesn’t take his player’s mistakes as a serious issue, but rather as a lesson that can be learned from.

Having the Tritons being eliminated from the NWAC doesn’t stop Gray’s confidence from preparing for the next regular season. “There’s an old saying that losing is part of the game. If you never lose, you are never truly tested, and never forced to grow,” says Gray, He believes that losing should be taken as a life lesson for us to improve. “We have what it takes to succeed; we just have to make the right decisions in that regard.”