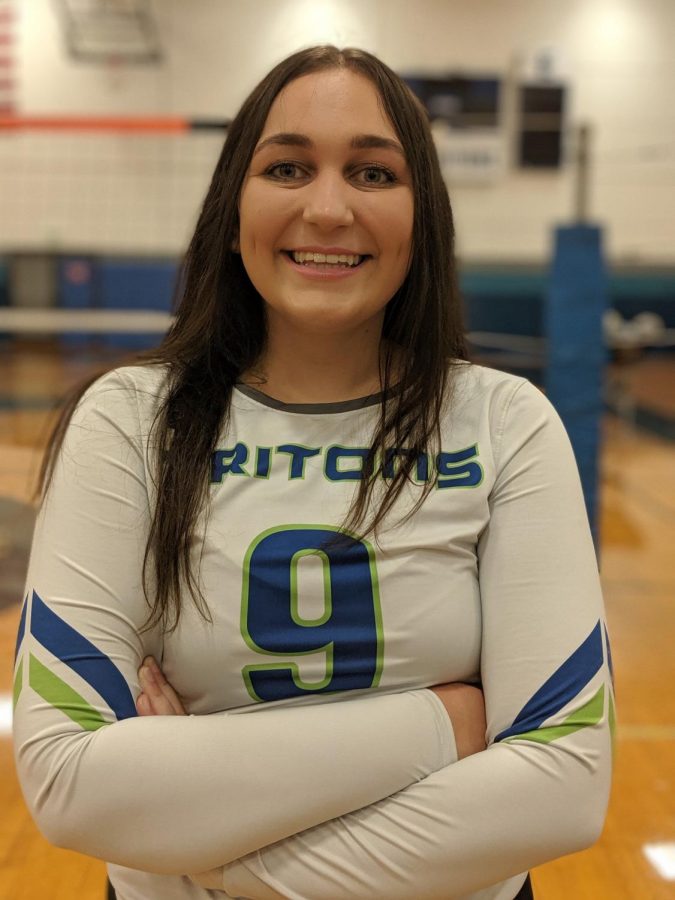 Despite suffering a knee injury early in the season, Haylee Hooper was able to recover quickly and return to the court.

Ace, ace, baby! The Edmonds Community College volleyball team has had an exciting recent string of successes. Sophomore Haylee Hooper, who plays setter, was highlighted as the Northwest Athletic Conference volleyball athlete of the week for the third week of September.

This season, the team is 23-12. Their coach is Tony Miranda. Last season, he led the team to an impressive 4th place rank in the conference. Miranda is a UW graduate and head coach at Northwest Juniors Elite Volleyball Club. He has been with NWJRs since 1989 and with EdCC for three seasons. Through his extensive coaching experience, he continues to prepare his teams for success.

Miranda is a coach that takes no excuses. At one point in their home game against Olympic College Rangers on Oct. 18, he looked at one of his players that had just made a mistake and said “take responsibility”. While coaching players on the sidelines, he held a demanding presence. It was met with constructive ways to improve their playing.

The night started with warm-up drills, with the Tritons warmed up their serves. Most of their other drills consisted of blocking and digging. From the get go, it looked like they were preparing for Olympic to have strong hitters and to shut down their offense. Blockers practiced jumping as high as they could to ensure that no ball would come back over. Off in the corner, teammates were spiking the ball to each other to perfect their digs.

Throughout the game, Edmonds’ blocks were strong, while sometimes the ball would come straight down and they’d have to scramble to play it. The team took tips to their advantage, often times tipping the ball to places on the opposite side of the court that didn’t have anyone there. Hitting was overall very successful for the team. The Rangers had a hard time hitting balls in, but the Tritons’ hitting was on point. The opposing team also struggled with blocking our hits, which aided us in our win. In the third set, the Tritons started 6 points behind. Thanks to strong serves and digs, they were able to come up for the lead.

Hooper was calm and collected on the court. She is laser focused on the game while staying down-to-earth. Starting the night off busy, she served first. She’d then hustle up to her spot each time, delivering sets that went directly to the hitters.

Her optimism throughout the game seemed to keep the team’s spirits high. At one point, she tripped and came up laughing. Throughout the night, if one of the players made a mistake, Hooper would be one of the first ones to give them support. She’d give them a look that seemed to say “it’s all good”. During the game, she faked out the opposing team by pushing the ball to the other side during her contact. Usually setters set the ball to their hitters, but Hooper took the opportunity to score herself. Her sets were clean and direct, giving hitters plenty of time to complete successful hits. It’s clear why she was highlighted by NWAC.

In the third set, freshman outside hitter Sara Gauna had an impressive kill. She was able to get serious height from her jump and slam it to a spot on the other side where there weren’t any opposing players.

The team’s defense was astounding, while keeping the audience on their toes. There would be times when a blocker would go up to block and the ball would come straight down, but they were able to pop it up, bring it back into play, and score.

These stressful moments were met with a woman in the crowd giddily laugh-gasping when things went well. Members of the crowd who were feeling the heat and pressure of the game found some humor in the third set when the court kept having to be wiped down by gym staff. The game was quickly picked back up. The team kept their positive momentum up with high fives and “good jobs”.

“We really needed a win,” Miranda stated after the game. After a nail-biting, evenly matched game, this win for Edmonds was well deserved.

If you have not yet attended a game or would like to keep showing the team support, there is a home game on Wednesday, Nov. 9. Their away games are on Wednesday, Oct. 30 at Shoreline Community College and Nov. 21-24 for the NWAC Championship at the Tacoma Convention Center.