Haunted STEM Lab has a lot of spirit(s) 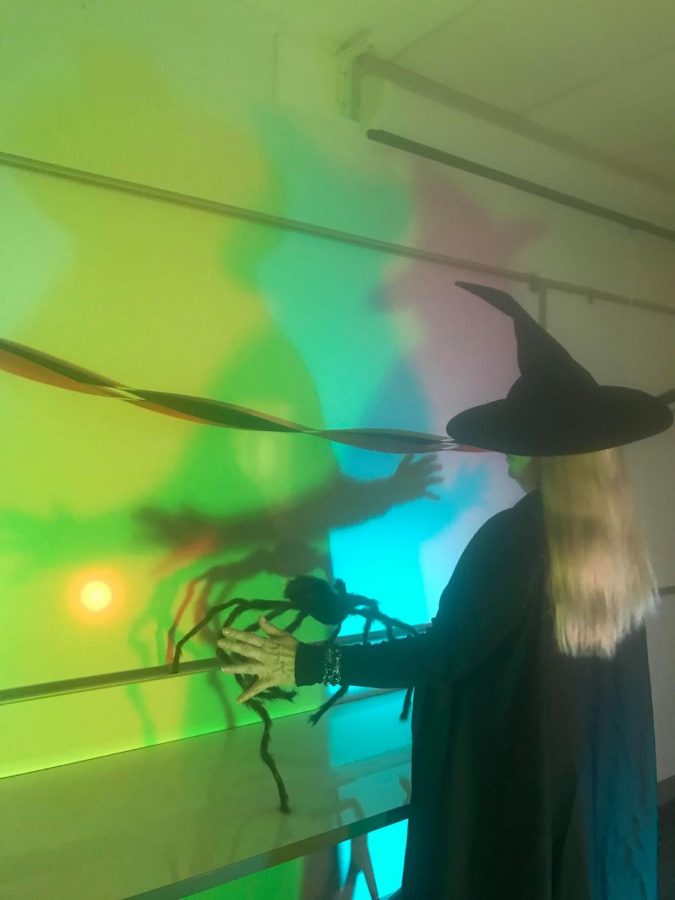 The spookiest time of the year is here, and Edmonds Community College’s Engineering 101 class brought their annual Haunted Stem Lab to death this past weekend. For over five Octobers, the students of Engineering 101 have haunted the halls of the Monroe building with their fascinating experiment displays. This year was as bewitching as always.

Upon entering the building, you’re greeted by Su Nelson at the front desk, who James Potts, the lab manager, described as “the head of everything” that they do there. She’s dressed from head to toe in a witch costume, handing out candy and badges to those entering or exiting the building. When asked what I should expect in the haunted hallways, she assured me that it wasn’t “scary, scary”.

The halls are haunted by the opposite of ghosts: science. “It’s whatever the Engineering 101 students bring to the table,” said Nelson. The excitement of it all is seeing what the students come up with every year, and being able to develop a better understanding of science through a fun, halloween-themed display.

Young children gathered around various experiments, and were even allowed to help with the process of the demonstration. I observed as a group of students helped a young boy shoot down a stack of cups, using a large white tube that appeared to be some kind of canon. The tube canon did not work every time, but it demonstrated what scientists refer to as “trial and error”. When the canon did work in its intended purpose, the excitement of the group and the children was palpable.

“We’re showing off these different experiments. You never know what might spark someone’s interest.” Says Potts. The kids, some of which were dressed in their Halloween costumes, definitely seemed interested in the way these projects worked. Their faces lit up as they watched an experiment where flames danced to the beat of Michael Jackson’s Thriller, or put their hands on plasma globes, watching the electricity follow their fingers. Hopefully each one of them left the building feeling inspired, having just intensified their love for science.

This is what Beatrix Teng, President of Rocketry Club, says is her favorite part of doing the Haunted Stem Lab. “We have the resources here to do a lot of experiments that they can’t do in their elementary schools and middle schools, so it’s great to see them have that experience here.” The hard-working students all surrounded their own tables and booths, tinkering with their experiments, or demonstrating it to a group of guests.

Teng was relieved to have so much freedom when it came to choosing an experiment to exhibit. Being able to have creative control over what they wanted to do, and be given the resources they needed in order to do it is essential to the students ability to feel excitement towards their subject and their school work. Teng believes that the staff here at EdCC were more than willing to accommodate the students in order to see them achieve their goals in whatever way they could: “Whatever we wanted to do, the staff was really supportive in getting us the materials to do it.” Thanks to the commitment of the staff, and the talent of the students, many of the experiments turned out to be successful.

After making it through the halls, a rocket launch is set up in the parking lot. This is the second year participating in the Haunted Stem Lab for the Rocketry Club, but the first year for Bryce Blanchard. Blanchard was most excited to see if the water bottle rocket worked in the way that it was supposed to, and was able to not crash into anyone’s cars in the process. Thankfully, the rocket worked wonderfully. You could hear the cheers of the successful students through the halls of the building, like a ghostly hum.

When asked why he liked what he does, Blanchard laughed and said, “How many people get to say they made a rocket?”

If you’re interested in science, engineering, and rockets, stop by the Haunted Stem Lab in Monroe hall next Halloween season. The hard work put in by all the students and staff members involved is evident as well as rewarding. It’s true that this time of the year has a focus on the supernatural, of which cannot be proved by science, but that doesn’t mean that science can’t be spooky too.